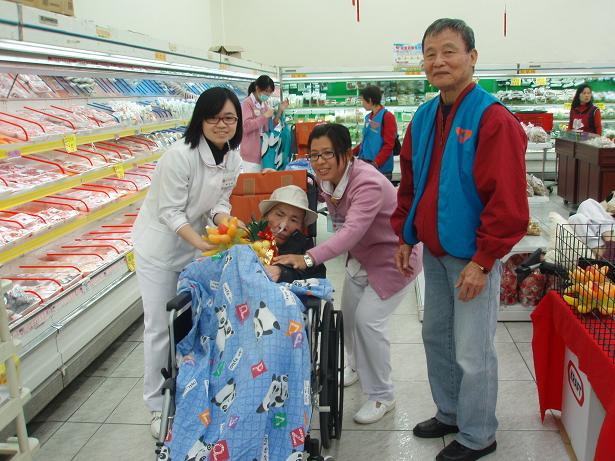 The volunteer team is established on April 27 1989 according to the Code: 87 Society 1 No. 4527 Guidance Letter of the Society Department of Taiwan Provincial Government. There were 4 groups(Ren-ai, Catholic, Zhu-en and I-Quan-Dao) for 70 volunteers.

The Guidelines of the Volunteer Organization has approved according to the letter coded “87 Code Society 1 No. 1760” issued by the Society Department of Taiwan Provincial Government.

According to the Guidelines, we elected Mr. Chen, Ming-sheng as the first leader in 1988 and elected Mr. Ou, Li-chi as second leader.

As the request of organization streamline, since 1990, the volunteer group joined the 21st group of the Social Harmony Project for Volunteer Services and serve for the volunteer service activities in Pingtung County.

The volunteers serve form Monday to Friday by rotation according to the schedule. The activities including entertaining the disabled residents with singing and dancing and providing service by the request of the residents and we have the volunteers with different religion arrange a religious activity everyday for the residents--Thursday and Sunday for the Christian, Sunday for the Catholics, Wednesday for I-Quan-Dao and Monday, Friday for the Zhu-en. The residents will be both satisfied on spiritual and material life and enhance their life quality.

The welfare for the Volunteers

We organize a team meeting in the end of year to discuss the work plans of the next year. We also offer trainings of pre-training, recognition training and enhanced training to lift the volunteers’ professional knowledge and enhance the quality of their service.

We proactively offer the professional training: Besides the training for the newly joined volunteers of the annual team meeting and the workshops, we send major cadres of volunteers to join the volunteer seminars hosted by the Social Welfare Training Center for Taiwan Provincial Government.

In addition, our volunteer Mr. Chen, Ming-sheng was honored by the 13th Golden Camels Award host by the Chinese Volunteer Association in 1995. The award is rewarding the volunteers in Taiwan.

Our volunteer team won the Best Volunteer Group Award given by the Taiwan Provincial Government in 1999.

The qualification of volunteer

Those who are (1)over 18 years old, and (2)vow to be devoted in social welfare services will be qualified to join our volunteer team.